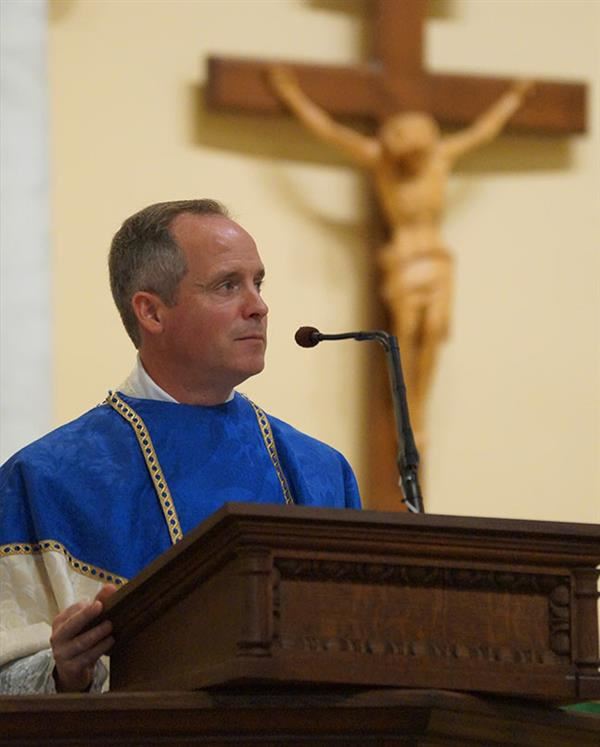 Fr. Reid is currently pastor of St. Ann in Charlotte. Originally from Martinsville, Indiana, he was raised Methodist but converted to Catholicism during his senior year of college. He graduated from Indiana University with a B.S. in Marketing, and was working at a large marketing firm when he felt called by God to pursue the priesthood. He entered seminary at Theological College at The Catholic University of America, where he earned a Master’s degree in Philosophy. After four years of formation, Fr. Reid left the seminary to further discern his vocation. He accepted a job with the Migration and Refugee Services of the US Conference of Catholic Bishops, where he worked for five years before returning to seminary at the Seminary of the Immaculate Conception in Huntington, NY. There, he earned a M.A. in Theology and a Master of Divinity. He was ordained a priest for the Diocese of Charlotte in 2004.
Father Reid was recently named Vicar of Education for the Diocese of Charlotte. In this role, he will also be supporting and promoting Catholic education throughout the Diocese of Charlotte’s 19 schools, sharing his faith and love for working with young people.

Mr. Bauman is originally from Wilmington, NC and went to college at the University of Tennessee-Knoxville. He is a convert and entered the Catholic Church his senior year of college. He worked for one year with college students doing campus ministry at the University of Alabama with the Apostolate of FOCUS, and after left to pursue the Priesthood. He completed his philosophical studies at Saint Meinrad Archabbey, and now resides at St. Joseph's seminary, as he hopes to continue priestly formation with the Diocese of Charlotte.